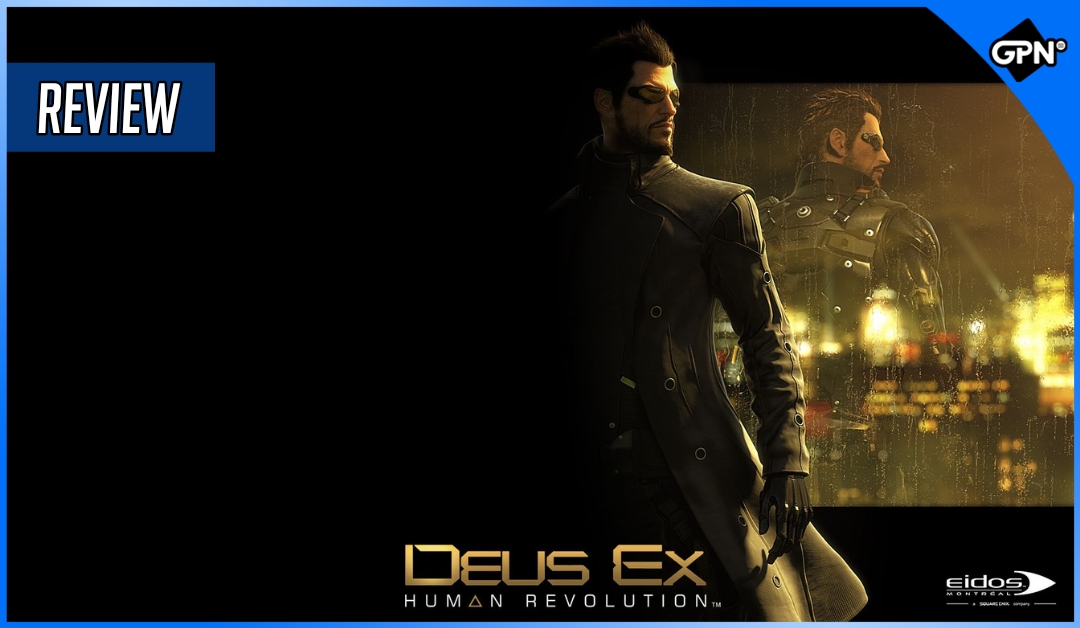 DEUS EX: HUMAN REVOLUTION is a prequel to one of the greatest sci-fi epics of all time. It’s a tactical first person shooter with stealth elements, set in the future of a neo-dystopian Detroit. Developed by Eidos-Montreal and published by Square Enix back in 2011, Deus Ex: Human Revolution is the type of game that retains everything people love about its genre, while giving the structure its own unique twist. I missed this when it originally released over a decade ago, and while I am unsure if I would have enjoyed it or not at the time, I’m very happy that I finally gave the game a shot.

You play as Adam Jensen, an ex-SWAT specialist who was fired under mysterious circumstances, given a second chance at a career when your ex Megan Reed recommends you for the position as the head of Security for the company she works for, Sarif Industries. Sarif Industries is an advanced bio tech company specializing in human augmentations, often scorned by many human Purists, terrorist attacks on facilities are not uncommon for companies like Sarif. Events escalate rapidly from here, Sarif Industries is attacked by an unknown terrorist organization that specifically targets Megan Reed’s research team. In your attempt to protect the scientists and their research, you wind up defeated by an augmented mercenary. Suffering severe injuries that you would have succumbed to without intervention, David Sarif decides to save your life using augmentations developed by his company. These enhancements effect every aspect of Adam’s being. Artificial arms, legs, eyes, internal organs, even his skin now define who he is as a person. One of the common themes of Deus Ex is the question of whether or not someone can still retain their humanity after undergoing augmentation, or if somewhere along the way they become more machine than man. As a disabled individual who could greatly benefit from these technologies being real, I was drawn into the overarching narrative from the start. The social commentary that the game juggles throughout its runtime is how humanity would react to bio tech like this existing, drawing stark comparisons of eras from humanity’s history. The decisions you can make as Adam allow you to map out how you want to react to these philosophical questions of what humanity is, most notably with the four different possible endings you can earn. However, many smaller decisions you make throughout the main story, and even most of the side quests also work to flesh out these themes.

Deus Ex: Human Revolution has one of the deepest narratives I’ve experienced in a first person shooter. The characters are full of dynamic motivations that drive their role throughout the game. Using the game’s unique persuasion system, you’re given much deeper insights as to what makes every character tick. From the many secrets that your boss David Sarif hides from you, to the final confrontation with the mastermind behind the main plot. How you confront the supporting cast can alter how you perceive the events that unfold. Actions have consequences, but so do your words. Knowing when to rein in your temper, when to trick people with your words, and even who to lie to and who to tell the truth all work together to craft a cavernous story that I never wanted to end. Deus Ex: Human Revolution offers everything you’d want from a complex sci-fi shooter set in Detroit. 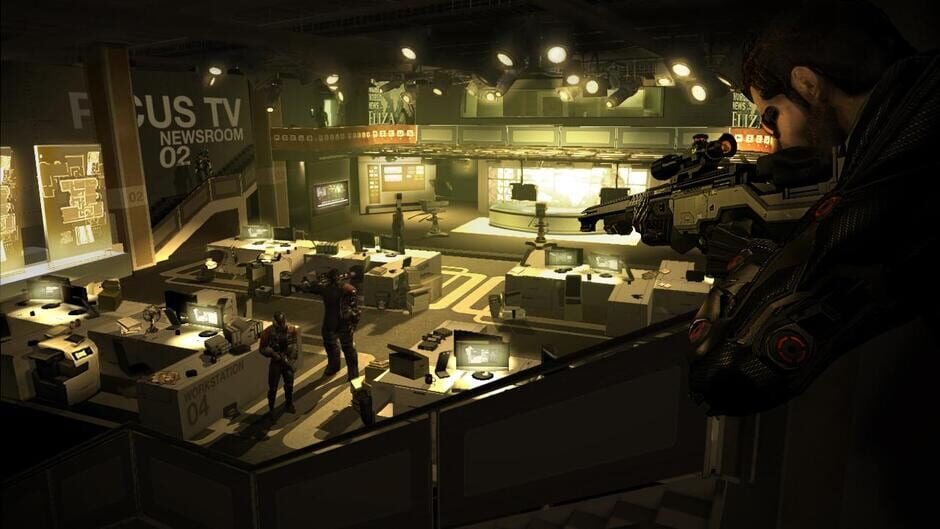 Deus Ex: Human Revolution is in many ways a rather simple first person shooter on the surface. You have your basic weapon types such as a 10mm pistol, a shotgun, sniper rifle, and so on. What gives it some spice is the blending of tactical stealth mechanics and hacking systems. The gunplay could be smoother overall, swapping weapons can be a pain at times, but the game has aged extremely well in most regards. The enemy AI isn’t the classic brain dead guard trope where you can stand in front of an enemy while crouched without them noticing you, rather the AI is incredibly intelligent, even surpassing some of the current AI quality in the AAA scene, and definitely some of the best for its time. The hacking also provided a huge advantage in a majority of the levels throughout the game. There are turrets strewn throughout the world of Deus Ex, and being able to hack them can be a life saver. I also found that the rather limited quantity of ammo made the game feel much more intense and pushed you to experiment with the many different weapons and modifications that can be discovered or purchased.

There’s also a RPG like upgrade system, allowing you to customize Adam’s augmentation’s to better fit your playstyle. The game provides you with the means to upgrade anything from your inventory space to how your retinal enhancements display information. I went with a moderatley stealth based build that didn’t shy away from being lethal if the situation called for it. The skills offered balance extremely well, never causing you to feel too under/overpowered regardless of how you decide to tackle the gameplay. The skills also extend into the side portions of the game. Some of the abilities you unlock might not have the most use during the main story, but the side quests are designed to utilize your arsenal in many diverse ways.

The side portions of the game are also the root of my biggest issue with Deus Ex: Human Revolution, having to constantly run back and forth from one side of the city to the other. The map isn’t particularly large, but with certain areas or paths being blocked off depending on where you are in the game, you have to consistently find new paths to get to and then turn in completed quest lines. If an issue as small as this is my largest issue, that should speak volumes towards how highly I think of the game. There’s so much lore, from Adam’s back story, the secrets of Sarif Industries, and heartfelt moments of Adam’s humanity glowing tucked behind the blue side markers on your screen. While these missions may not be necessary to make your way through the story with little difficulty, I’d argue you’re missing a decent chunk of what makes this game so special by skipping out on them.

Other than the map traversal with side quests, the level design is impeccable from start to finish. There are so many ways to complete each level that wikis to this day still have options for players to submit how they managed to get through the level. Every skill, every weapon from lethal to non lethal varieties all offer so much depth on their own, but when combined with level layouts that allow you to tackle each event from whatever angle you’d like, whether that be attacking it head on, picking off enemies from the shadows, sneaking pass the event completely, turning the enemies equipment against them, any combination of these tactics, and many more methods that would take far too long to list. With four different endings for you to hunt for, and a few other events mid game that can play out differently depending on your choices and actions, Deus Ex: Human Revolution has replayability in spades. 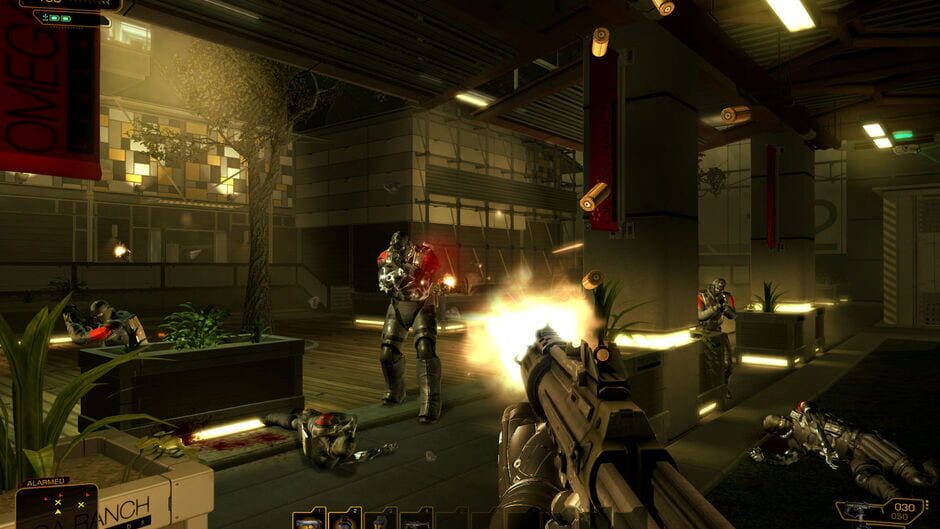 You would be hardpressed to find other FPS games of the same caliber in today’s gaming industry, let alone back in 2011. Deus Ex: Human Revolution hangs with the best of the best. Providing players with a unique narrative contemplating what it means to be human in a society with ever evolving technology. The gameplay takes a dozen simple in theory mechanic systems and blends them into an ultra-diverse structure, allowing any and all players to discover how they want to play for themselves. I am deeply disapointed that I didn’t play Deus Ex: Human Revolution sooner, but couldn’t be happier that I finally dived into the brilliance that Edios-Montreal managed to cook up.